I love to see an ancient art given a contemporary twist.  You might see have seen some of these fabulous pieces in featured in W, Vogue, Elle or Town and County over the last few years.  A contemporary take on the ancient art of cameo making" Amedeo ".  My personal favorite are the rings but do check out the whole collection and plan a visit when in the NYC, it is a real treat to see them in person. 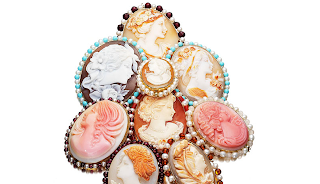 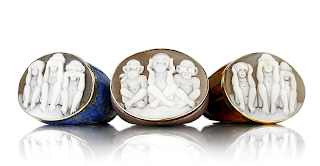 Some interesting facts about the art of cameo carving:

The process of creating a cameo is the transforming of a rough seashell into a piece of jewelry.


The shells are collected all around the world, although the best ones come from Africa (Mozambique, Kenya, and Madagascar) and the Caribbean (Bahamas, Mexico, and Honduras). This stage is very important, because it takes a long experience to pick the right shell to make a perfect cameo.
Actual cameo-carving begins by cutting out of the shell what is called the cup. It is a very difficult procedure because the shell is cut in two pieces by one skilled person, using an extremely sharp wheel to slice the hard shell.
In the cup, the artist draws the shape of the cameo he wants. The shell is concave, not flat, and shows several different shades of color.
At this point, the shells are ready to be given out to the cameo-carvers who will complete the process by turning the simple shells into artworks.
Cameo carvers find some pieces taking two days while others were carved over a series of months.
Posted by Timeless Cool at 6:00 AM