Today's post was prompted by a question that was asked yesterday....and it made me very curious so Peter here is the answer.... 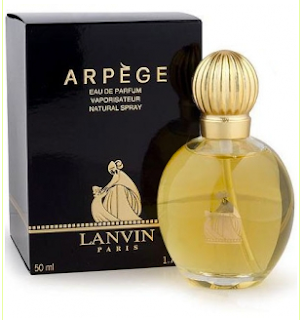 This great story is  from www.fragrantica.com:

This famous perfume was made by Andre Fraysse, Paul Vacher for Lavine home in 1927. The name was chosen by the daughter of the perfumer. Since she had been involved into music she chose name “Arpege”, i.e. music term arpeggio. The original 1927 formula incredibly corresponded to its musical term - the notes of perfume play their theme alternately. In 1993, the perfume was reconstructed and that was a successful work. The composition was mostly well preserved, but still that was second great perfume. Top notes are: bergamot, aldehide, peach, orange bloom, honeysuckle, orris. In the heart there are: rose, jasmine, ylang-ylang, coriander, sensitive plant, tuberose, violet, and geranium. The base consists of: sandal, vetiver, patchoulis, vanilla and musk. The bottle is lovely, too. The beautiful figures on the black misted background representing mother and daughter (wife and daughter of the perfumer), who are getting ready for the ball. In October 2009 the house of Lanvin presents Arpege 120, their popular fragrance created back in 1927, reformed in 1993. The fragrance is composed of such notes as aldehydes, peach, bergamot, orange blossom, honeysuckle, iris, rose, jasmine, ylang-ylang, coriander, mimosa, tuberose, geranium, sandalwood, vetiver, patchouli, vanilla and musk.

New package is work of art director of the house of Lanvin - Alber Elbaz, whose main theme was mother-daughter relation, i.e. sketches of Jean Lanvin and her daughter Margaret, dressed in gorgeous violet dresses created in Parisian style. Lanvincelebrates 120 years of the house with sketched black flacon with golden details and pink hearts around mother and daughter.
The new flacon of Arpege 120 has been available in two amounts, 50 and 100 ml, since October 2009.
Posted by Timeless Cool at 10:29 PM