I started researching the history of champagne flutes and got side tracked! Here are some interesting tidbits about the holiday New Year's......call it a refresher course for those who were not paying attention in history class, like me!

Did you know that New Year's is one of the oldest celebrated holidays? It was first observed 4000 years ago in ancient Babylon usually in late March,  the beginning of the year was considered to be at the time of the first new moon after the first day of the spring season. The Romans also celebrated New Year's during March until Julius Caesar changed the Roman New Year's Day to January 1 in 46 BC, hence the Julian calendar. The month of January was named after the Roman god, Janus, the God of all beginnings. Janus was always depicted with two faces, one looking back to the old year (past) and one looking ahead to the new year (future).

The New Year's Eve celebration....it was thought that one could affect their luck in the new year by what they did or ate on the first day of the new year..... For that reason, it has become common to celebrate the first few minutes of a new year in the company of family and friends, and loved ones.......... 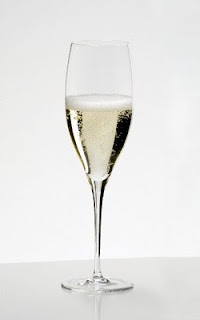 The narrow fluted glass that we are familiar with today was chosen because of its ability to preserve the delicate bubbles for which champagne is famous. This shape also allows you to experience the fine aromas of the high-quality base wines from which it is made. Note that the flute should be filled with only four ounces of champagne (never to the top), this allows you do enjoy the aromas of the yeasty bouquet while the bubbles are not allowed to dominate, but are part of the overall pleasure.

Posted by Timeless Cool at 9:00 PM