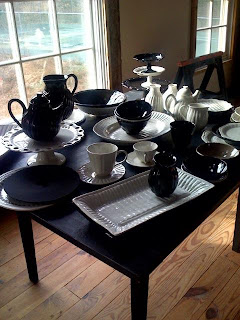 Here is a a photo I took last year in the studio of one of my favorite American artisans, potter Frances Palmer (a Conncecticut resisdent no less). Don't you just love the creamy white and black contrast? Perhaps we might she her designs on the White House Table?

In Friday's Wall Street Journal, Dominique Browning writes about artisans she hopes to see in the White House:
http://online.wsj.com/article/SB123206925413188425.html - for the complete article
Mr. Smith said in a press release he plans to bring "20th Century American artists to the forefront." Let's hope he also turns to America's artisans, such as potter Frances Palmer, weavers Jamie Gould, Elizabeth Jackson and Angela Adams, and designers Stephanie Odegard and Katie Ridder. But for now, you can expect to hear lots of talk about shopping at Ikea and West Elm, at least for the girls' rooms; Mr. Smith is savvy enough to know that it isn't in the Obamas' interests to give the impression that they have launched a bailout for the high-end design industry.